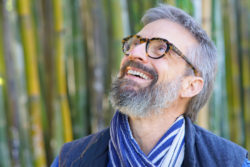 James Busby was born and raised in Alabama in 1962. He spent summers on his mother’s family farm outside of Clarksville TN, where he learned the names of creatures and plants from his first gurus: his grandmother and great aunt.

James received bachelor’s (1985) and master’s (1992) degrees in music from Westminster Choir College in Princeton NJ. While there he sang with the world’s great orchestras, performing in concert halls and opera houses throughout the United States and Europe. He conducted choirs and taught singing, yoga and meditation in schools in Brooklyn NY and Los Angeles CA for 33 years.

He began studying yoga and meditation in 1993 at the Kripalu Center for Yoga and Health (Lenox MA), where he was certified to teach yoga in 1995.  At Kripalu, his meditation studies were with Jonathan Foust, Bhavani Lorraine Nelson and Stephen Cope.  He sat his first retreat at Insight Meditation Society (Barre MA) in 1999.

In 2019 he completed Dharma and Yoga Teacher Training at Spirit Rock (Woodacre, CA) where he continues studying. His teachers there include Djuna Deveraux and Mark Coleman.   He is currently a yoga, mindfulness and CrossFit instructor in Los Angeles, CA and loves sharing with seekers of all ages the transformative power of mindfulness in nature.